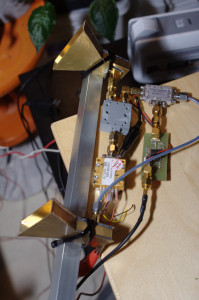 I am currently building an FMCW radar. I do not have all the parts finished so I made a doppler radar from the parts I had on hand.

In a nutshell this type of radar does not give out any signal if there is nothing moving in front of the radar. If something moves in front of the radar the resulting frequency spectrum contains a frequency which is directly related to the relative speed of the object. Doppler radars are widely used in automatic door openers, speed guns and as early aviation radars. 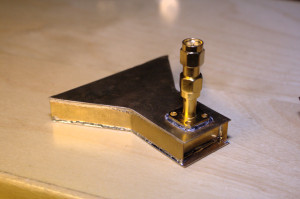 The antennas are H-plane sectoral horns made from brass sheet and soldered together. I measured the matching by using a 20dB directional coupler and measuring the output from the isolated port (with my HP 8592A 22 GHz spectrum analyzer) to figure out the return loss. 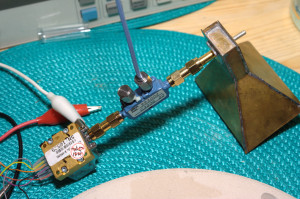 I could only do measurements within 8-10 GHz with the YIG oscillator I have and the antennas seemed to perform pretty well. The worst matching was around -10dB around 8.3 GHz and best at 8.8 GHz at over -20dB.

This way of measuring the return loss is not too accurate due to the low directivity of the directional coupler but it is good enough for coarse measurements. I measured the directivity of the directional coupler I had at around 28dB. Datasheet for the coupler says 17dB in minimum. I also made a pyramidal horn like the one in the picture but it turned out quite ugly so I decided to just use sectoral horns because they are easier to make. I also experimented with a tuning screw directly above the feedpoint but it did not seem too useful. I could only tune the antenna by 3dB or so.

I also took a quick video to show how easy it is to solder even brass sheets with my JBC soldering station: 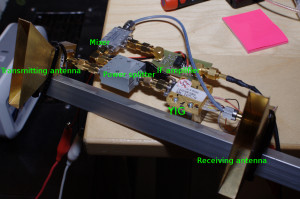 The radar is fairly simple. I have named all the components in the picture above. I am using a 8-10 GHz Stellex YIG-oscillator as the signal source. The output from the YIG is around 9 GHz at 15dBm. The signal then goes to a power splitter which splits the signal to the transmitting antenna and to the mixer.

The mixer mixes the signal coming from the YIG and the signal received by the receiving antenna. Any moving object in front of the radar will cause a doppler shift in the received frequency which will be seen in the mixer output. 1 meter per second is about a 30 Hz doppler shift at 9 GHz. In theory I should be able to see speed from way under 1 m/s to mach 2 (~20kHz doppler shift). There is a simple OP-amp circuit with two series amplifying stages to give a gain of around 10000 to the IF signal. The signal then goes to my computers sound card. The IF-amplifier is not that great, it basically should have some kind of an automatic gain control circuit. With just an amplifier the amplitude is way too big with objects close and then drops off very fast with distance.

I made a couple of demo videos of the radar:

The output from the radar goes straight to my computers sound card and is then played through the speakers.

For the second video I strapped the radar to my balcony and ran away from it to see the range. The signal is overlaid on the video so you can hear how fast it drops off. I could probably boost the range by quite a bit by using an AGC circuit which might be my next step with this radar…