A radiation detector with a solid-state PIN-diode sensor

I saw a cool app-note from Maxim that described a gamma-photon detector which used a regular PIN-diode as a sensor. The actual circuit looked simple enough so I decided build it, you can never have too many measurement instruments right? 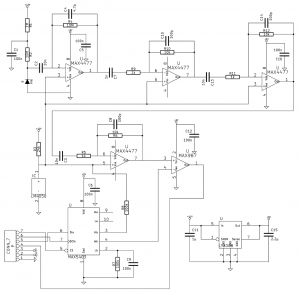 The detector in itself is pretty simple, just some op-amps and a comparator. I decided to build it with all the bells and whistles so I included a digital potentiometer so you can adjust the reference voltage to the comparator via an SPI-bus. I also used a 5V reference shunt as the reference for the op-amps and the comparator to keep the circuits behaviour more consistent. I didn’t have any adjustable capacitors with an SPI bus so I decided against using one (instead of C4, changing the capacitance changes the gain).

Basically the circuit works by amplifying the small current that is generated when a photon hits the PIN-diode. This includes visible light as well so you need to shield the PIN-diode from light. The signal is then amplified with four low-noise op-amps and then a comparator is used to distinguish the photon strikes. 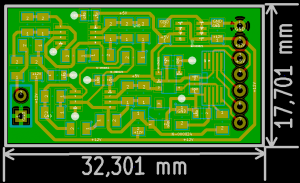 I sort of got carried away with the PCB design (like I usually do) and the layout ended up pretty compact and very neat (if I may say so!). Zero jump wires and a uniform ground plane. Passive components are 0805 (except 100n caps are 0603) and the op-amps are in a µmax-8 case and digital pot is µmax-10. Designed with kicad. 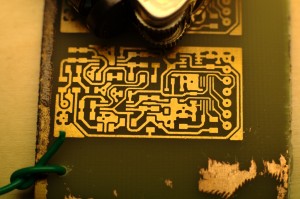 Radiation detector board after etching 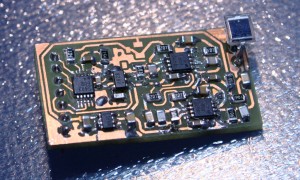 Radiation detector board after soldering

The board came out great. I did manage to mix up the comparator inputs but it’s not a big mistake. At first I soldered the PIN-diode straight on to the board (you can see it in the upper right corner) but that didn’t really work. I didn’t figure out any neat way to shield the whole board from light with all the wires going to it so I built a “probe” out of some aluminum tubing and aluminum foil and heatshrink tubing: 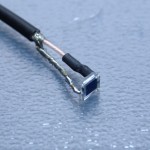 BPW34 PIN-diode soldered to a coax-cable 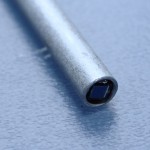 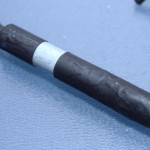 I did some measurements with an americium-241 radiation source from a smoke detector (it emits some low-energy 60keV gamma radiation) but the aluminum foil blocks over 90% of those low-energy gamma photons and there is not much activity to begin with so the effect is not too dramatic. The detector detects photons few and far between so it is hard to distinguish the effect the americium has. I need to build a proper measurement rig that counts the photons to do any proper measurements. Some source that would emit higher energy gamma radiation would also be very handy, to make sure the photons are really getting all the way to the PIN-diode…