A few weeks ago I was on a junkyard that had a decent amount of telecommunications equipment. Mainly racks of old cellphone 3G (I think) basestations from which I got a load of some interesting RF stuff.

I also found a pretty rough looking switchmode power supply from the ground, made by Ascom energy systems. It had been sitting out in the rain for quite some time (I think at least a couple of years). It was apparently used for charging 48VDC battery systems used to back up cellphone basestations. It is specified for 600W and it’s fairly compact and robust looking so I decided to take it with me and try to fix it. It’s also passive cooled and designed to fit in to a 6U high rack. Here is a picture of one mounted on a rack (on the left) with with four other PSU modules: 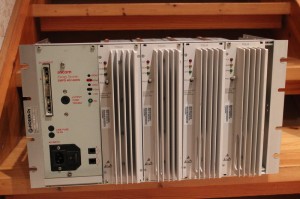 Ascom SMPS on a 6U rack unit, image courtesy of Mikko Laakkonen 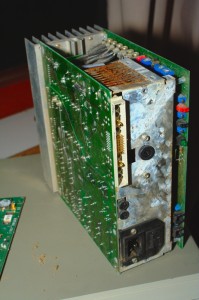 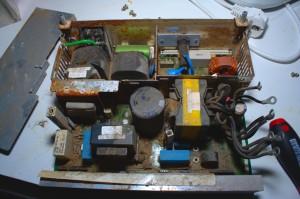 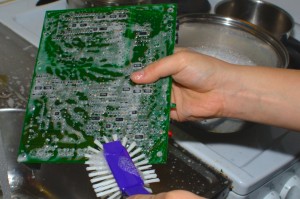 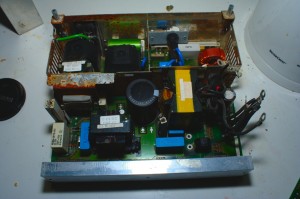 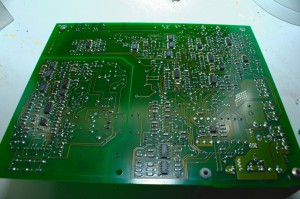 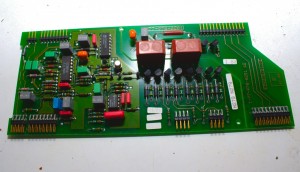 The PSU basically has three parts, the power board with the power transformer and filter components and MOSFETs, a control board that contains a load of SMD stuff for controlling the PSU, and a small riser board that connects these two boards together.

After washing the next phase was to put it in the oven to dry. I left it in a 75°C oven overnight. This did not seem to do the trick, as when I tried to power it on it made some screeching noises and didn’t output anything. I put it back in the oven at around 125°C for five hours or so and this seemed to do the trick: 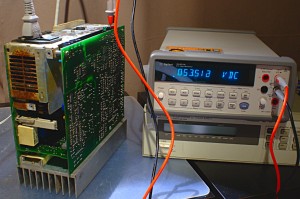 What’s pretty cool is that these PSUs are set for 53.5VDC output when in use, and this unit was SPOT ON (I didn’t touch any trimmers) after lying in mud for years!

The PSU does make some chirping noise as you can hear in this video but I’m fairly sure it’s within normal:

Don’t be scared by electronics that look like they’re in awful condition, with some cleaning (and drying) they can still work great!