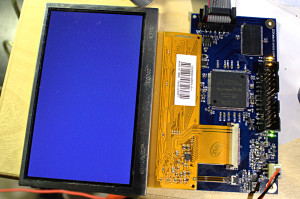 This is a project I made quite a while back (about 7 months ago). I wanted a bigger display for a project of mine and noticed that PlayStation Portable displays (480×272 pixels) are quite cheap on eBay but they do not have an integrated controller/display driver. It seemed like a perfect project to practice using FPGAs so off I went.

The PCB is a 4-layer design containing an Altera Cyclone II FPGA (EP2C5, 4608 LE), two buck-converters (1.2V core voltage for the FPGA, 2.5V for “main” power), 3.3V linear regulator for the configuration device, current-mode step-up SMPS for the backlight (which needs around 18V), configuration device, oscillator (20MHz) and an asynchronous memory chip (IS61WV10248BLL, 1x8M) for the framebuffer. It also has some general purpose LEDs and 20-pin IDC-connector meant to be the “input data bus”. The PCB was designed so that it would be possible to “wrap” behind the display and be securely glued or otherwise (double-sided tape) attached there. The display is LQ043T3DX02.

I managed to get the display running pretty easily despite the datasheet containing quite a bit of chinglish so I had to do some experimenting. I haven’t implemented the data bus or the framebuffer yet but I’ll promise to make a new post when/if I get around to it :)!

Here is a schematic of the project (missing the power sheet but that should be pretty self-explanatory): PSP display driver schematics

You can find the VHDL code (including testbench) from GitHub: PSP-Display-Driver

Here the display is running a cool sprite demo made by my friend mankeli:

Thanks a lot to jahonen for helping me out with VHDL and other stuff!