I wanted to listen to HF bands using my RTLSDR USB dongle. Since the RTLSDR dongle can only receive from around 64MHz upwards I needed an up-converter which converts the HF band (0-50MHz) to a higher frequency I can receive with my dongle. The converter will work up to about 70MHz.

Many of the available converters seemed quite pricey and not too well designed (no filtering on the local oscillator etc.) so I decided to make my own.

The converter is fairly simple, it consists of an elliptic low-pass filter on the input, a local oscillator with a band-passfilter, a mixer and a Butterworth band-pass filter on the output. The converter takes in a signal in the 0-50MHz range and mixes it with the 100MHz local oscillator, yielding a 100-150MHz signal you can receive with an RTLSDR dongle.

After quite a bit of reading filter design books and simulating this is what I ended up with: 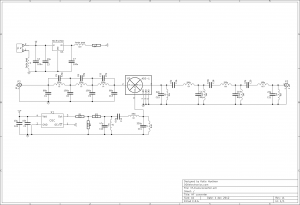 If you’re wondering why the signal is going in to the “IF out” pin of the mixer; it’s not a mistake. This is a small trick you can use to extend the frequency response lower when you are up-converting.

The mixer I used is an ADE-1 from Mini-circuits and the local oscillator is an ASEM series oscillator from Abracon (100MHz +-50ppm model).

I ordered the PCBs from iTead: 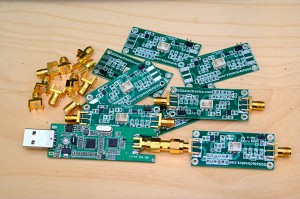 Few HF converters with an RTLSDR dongle connected to one

Here is a 0-50MHz (-30dBm) sweep on the input and spectrum analyzer connected to the output: 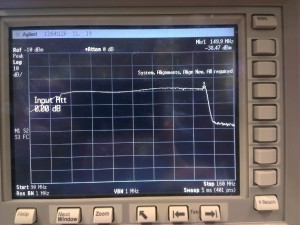 Here is a 10-150MHz sweep of the elliptic Cauer low-pass filter on the input: 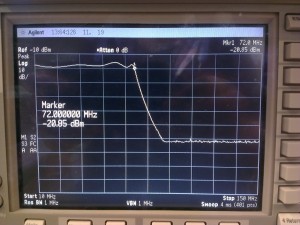 This equates to around 9dB conversion loss (typical for a ring diode mixer) with around few dB ripple on the passband so I’m pretty happy with it! There is about -51dBm of LO leak on the output which is also quite low.

I did some testing by unwinding a few meters of wire from a roll and used that as an antenna and this worked really well. Lots of signals to listen to!

The converter is designed so that it should fit to one of these (just need to cut the box a bit shorter): 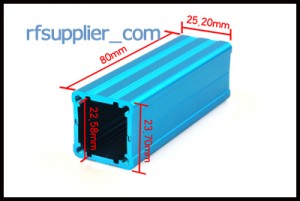 Box for the HF converter

Edit: All converters have been sold.

edit: Added a picture of a 10-150MHz sweep on the input low-pass filter