I’ve had the need  for a high-voltage differential probe for a long time. Mainly for probing mains connected switch-mode power supplies and such. I looked in to buying one but they are fairly expensive for what they are. You can get 25 MHz bandwidth Chinese ones for around 150 € but anything from Agilent/Tektronix/Fluke will quickly run up to multiple hundreds. I looked in to making one and they seemed fairly straightforward.

Pretty much all the HV differential probes are made out from discrete op-amps forming a basic instrumentation amplifier: 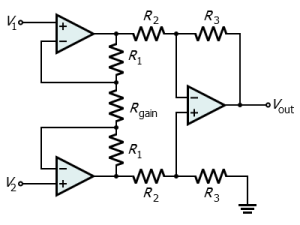 There are integrated single-chip solutions for instrumentation amplifiers but they are usually designed for different kind of applications requiring high DC accuracy and common-mode rejection ratio (CMRR) and very little bandwidth. I tried to find a suitable integrated instrumentation amplifier but I really couldn’t find any that would have a bandwidth of more than a few MHz. Not really good for a differential probe which needs to have a bandwidth of at least 20 MHz or so for most applications.

Finding suitable op-amps was still fairly challenging. The devices need to have good CMRR, lots of bandwidth and high slew-rate. The best candidates I found were LT1818 and LT1819 (dual version of LT1818), which have a gain-bandwidth product of 400 MHz and 2500 V/us slew-rate. I was a bit worried about the fairly high input bias current of +-8 uA though. I ran a bunch of simulations with LTspice (which already had models for these op-amps) which were very encouraging, indicating a -3 dB bandwidth of around 150 MHz for the design. Simulating CMRR seemed to give identical results with different op-amp models so I didn’t really trust them, it seemed like the models are very simplified in terms of CMRR.

The front-end of the HV differential probe is fairly simple, consisting of basically two resistive voltage dividers. The front-end also has capacitive dividers in parallel with the resistive dividers to adjust the AC response of the probe. There is also a 200 ohm trimmer pot to adjust the balance (which results in DC offset in the output) between the sides. The probe is designed for 100:1 (-40 dB) gain and 500 Vrms.

The most critical thing in this type of a probe are the resistive dividers. Any difference between the two dividers gets directly converted to a common-mode signal which is undesired. For the dividers I used 0.1 % Panasonic ERA series resistors. There are a bunch of resistors in series to withstand the voltage and also reduce the error in resistance. I didn’t bother measuring and adjusting both dividers to match each other but that is a possibility. 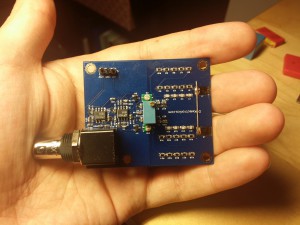 The inputs are shorted together in this picture for the CMRR measurement. I had one small bug in the layout; The supply pin for the single op-amp was connected on the wrong pin. Easily fixed by just bridging the adjacent NC and supply pins with solder.

The PCB is designed to fit in to a Hammond 1455 series aluminum extrusion enclosure. Haven’t gotten around to enclosing it yet. 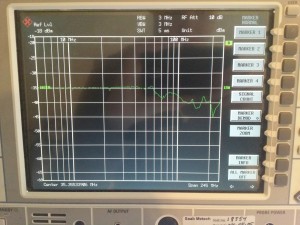 Performance of the probe came out pretty decent I’d say. It is comparable to lower-range models from Agilent. There seems to be some kind of resonance near 70 MHz which drops the response around 4 dB down. It might be related to the fact that the input of the probe is not 50 ohm terminated or some other resonance like the BNC->2x banana connector adapter. If you discount that dip the -3 dB bandwidth looks to be around 100 MHz with which I’m quite happy with. 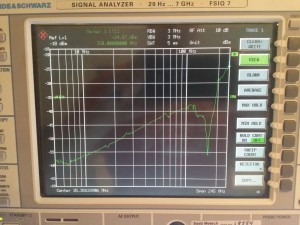 I’m quite happy with the CMRR as well. There might be some potential for more performance here, I quite quickly tuned the probe and didn’t measure or adjust the voltage dividers in any way. The adjustable capacitors were just tuned by feeding a constant HF signal in common-mode and then I tried to minimize it by adjusting the trimmer caps.

Here is a sample measurement from a Meanwell 5 V switch mode power supply, which seemed to have a flyback topology. Just a single FET with some controller IC. The measurement is over drain-source of the FET. The voltage is quite low (around 100 V peak) in this measurement because I just triggered on the signal when I plugged the PSU in to the wall and the voltage hasn’t had time to rise too high yet. Seems to work! 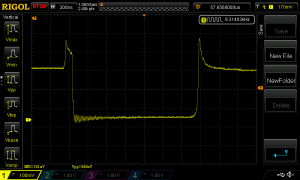 Measurement of a FET D-S

Here is the PCB design: differential_probe_v1