Here is a quick project I made one weekend. I had just gotten my new toys, a Rohde & Schwarz FSIQ 7 GHz spectrum analyzer and two R&S SME 03 signal generators. I wanted to make something where I could employ my new test gear, so I decided to make a microwave noise source. 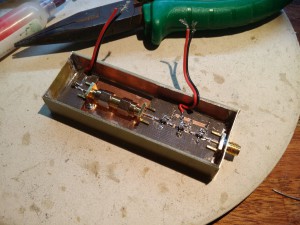 The noise source is quite simple. It has a reverse biased AT41486 RF-transistor and the noise due to the avalanche breakdown is very wideband. The transistor has its base grounded and the emitter is connected to a 330 pF decoupling capacitor via a 49.9 ohm resistor. The biasing voltage is connected to this capacitor via a 10k resistor. The noise source is the small board located on the left side of the enclosure.

After the noise source there is an amplifier stage which has three ERA-5 MMIC amplifier stages which are resistively biased (to make the response as wideband as possible). I made the first amplifier version using MSA-0386 MMIC amplifiers but they seemed to have too little gain. Here is a 1 MHz to 3 GHz sweep of the original amplifier with -50 dBm input power:

For the next version I used ERA-5 devices to get more gain. The first version seemed to be oscillating or something because there was a strong +10 dBm signal near 30 MHz or so which was not visible with the previous version:

It was easily fixed by adding some ferrite beads and more filtering to the biasing network. With the ERA-5 devices I got around 20 dB more gain:

I experimented by adding some resistive feedback over the amplifier stages (1 nF ceramic capacitor in series with a 240 ohm resistor) to get a more linear response which wasn’t so effective: 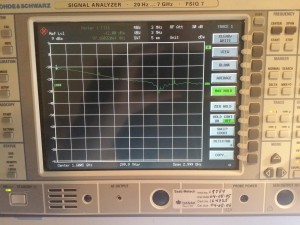 The response is flatter in the end portion but the lower end is still quite a bit higher, and I also lost some gain. I guess it is marginally better with the feedback. 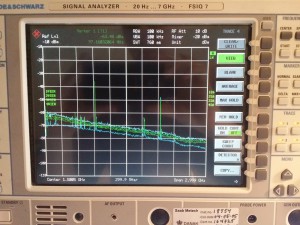 The source has an ENR of close to 10 dB on the low side of the range and around 5 dB near 3 GHz with a biasing voltage of 15 V. As a next step I would need to make the enclosure more sealed, the cellphone signals seem to get through pretty well. I experimented with using ferrite beads and snap-on ferrites and different covers for the enclosure but none seemed that effective in blocking the cellphone signals. I think my cover is just too loosely fitting and badly grounded. But anyway, it was a fun quick weekend project!