I had the need to test the saturation current of some inductors I had wound. I built this pretty simple tester for testing the saturation current of inductors. It seems to work pretty well up to about 100A or so. I had a switch-mode power supply (48V to some lower voltages at around a kW or so, from telecommunications equipment) laying around that had a lot of components (FETs, power diodes, electrolytic caps and shunts) I needed so I desoldered it and turned it into this tester. 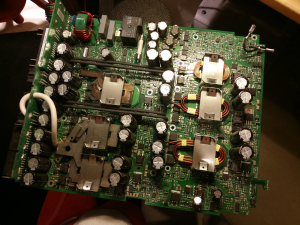 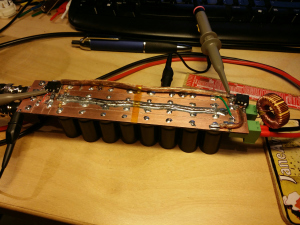 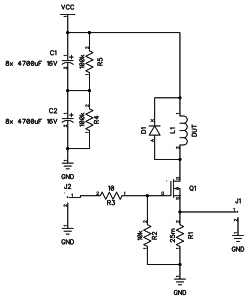 The principle how it works is pretty simple. The FET switches current through the device under test (=inductor) and the inductor will start to saturate at some current level which shows up as peaking of the current that is going through the inductor: 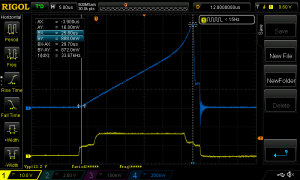 The diode in anti-parallel with the inductor is also important. Without the diode you would have a massive voltage spike over the FET when it switches off because the current would have nowhere to go. I used a half of a 30CTQ060S double schottky-diode.

I’m using my Hantek HDG2002B signal generator to drive (attached to J2) the FET. The FET gate drive waveform is not the most optimal (large plateaus due to miller capacitance) because of the limited drive capacity of the signal gen but it seems to work. I’m using the pulse mode with a 10 ms period  and pulsewidth of 5-100 µs or so depending on the inductor. The repetition rate could or should be lower than the 100 Hz I’m using (the make sure the current decays properly between pulses) but this Hantek signal gen does not seem to work properly with periods longer than 10 ms for pulse mode… You can also control the “rate of saturation” by adjusting the voltage over the inductor. I have the thing connected to a lab PSU from where I can vary the voltage between 0 and 30 V.

With around 100 A peak and 30 µs pulsewidth the voltage of the capacitors drops about 300 mV so I could probably do with less caps. But hey, they were free so…

If I’d want to make this circuit better I would swap my 45 mOhm RDS FET (STB40NS15) to something with a lower RDS and change my shunt to a smaller resistance as well.

You can see in the following scope shot that at higher currents the measurement setup starts to saturate (current waveforms slope actually goes down a bit before saturation): 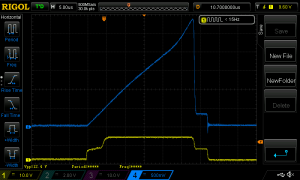 Thanks for the project idea to jahonen!