I’ve been thinking about making a temperature logger for my room and my computer, I set on using DS18S20 sensors from Maxim because they’re common, cheap and overally pretty ideal. My computer is so new that it does not have a serial port (not 100% sure, I think there might be a pinheader on the motherboard with serial port connections) so I have to use USB for interfacing. Next thing I had to do was to make an USB to 1-wire adapter so I could attach the sensors to my computer.

I browsed around for a while and set on using the DS2490 USB-to-1-wire adapter chip because the circuit for it looked pretty simple. I modded the component values a bit from the ones on the original schematic from Maxim to ones I had in hand. I used 0805 sized SMD components because I have those in store. 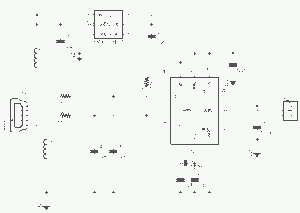 There isn’t any special components except the actual chip (DS2490). The 5V->3.3V regulator chip (MAX8881EUT33) is not crucial and it could be replaced with whatever 3.3V regulator you have in hand. The chokes after the mini-USB connector are just for EMI so they’re not that critical, any low value (under 1µH) choke or just a ferrite bead with the wire going through should work fine. Too much inductance might hamper the USB communication. 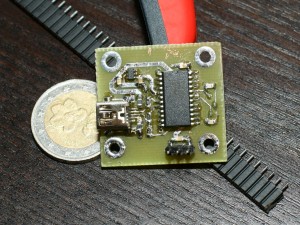 After I had the adapter working, I made sure the kernel modules “wire” or “ds2490” are not loaded. I don’t want to use those so I unloaded them and added them to /etc/modprobe.d/blacklist to make sure they do not get loaded. Then I installed owfs. I added the USE flags “fuse” and “usb” for owfs. After that I could basically just mount the owfs filesystem with “sudo owfs -u –mountpoint=/path/to/mountpoint/” (you can mount the owfs filesystem to where ever you want, I put it in /var/1-wire/).

But in practice it’s not that simple. The first problem for me was that I could not read the owfs filesystem with my regular user. To get the permissions just right, I added my own user to the group “owfs” and added the group owfs to the group “usb”. Then I had to make a .rules file for udev to make it mount the adapter with its group as “owfs”. I made the file “/etc/udev/rules.d/46-ds2490.rules” which contains (all in one line):

Next thing I had to do was to add the line “user_allow_other” to /etc/fuse.conf so we can use the option “–allow_other” with owfs which makes the filesystem available to other users. Now I could just mount the owfs filesystem with the command “sudo owfs -u –allow_other –mountpoint=/path/to/mountpoint/” Now I can print the temperature of one DS1820 sensor with the command (the “10.CDCEFB000800” is the sensors invidual ID): “cat /var/1-wire/10.CDCEFB000800/temperature”

I also built a humidity sensor to my 1-wire network from a DS2438 chip and a HIH4000 humidity sensor. OWFS supports this combination natively and can display humidity values straight up without any conversions.